Eagle Scout is the highest rank attainable in Scouts BSA. Achieved by two of every 100 Scouts, it is a milestone of of accomplishment — perhaps without equal — that is recognized across the country and around the world. Scouts who have earned the Eagle Scout rank count it among their most treasured possessions. “Eagle Scout” is not just an award; it is a state of being.

There are extensive requirements for the rank, including active participation in your troop as a Life Scout for at least six months, demonstration of the Scout Spirit by living the Scout Oath and Scout Law; earning at least 21 merit badges including 13 required badges; service in your unit as a Life Scout in a position of responsibility for at least six months; leadership in a service project for a school, religious institution, or your community; and participation in a Scoutmaster conference while a Life Scout.

Additional recognition can be earned through EAGLE PALMS, awarded for completing additional leadership and merit badge requirements. To earn a Palm, you must be active in your unit for at least three months since becoming an Eagle Scout or earning your last palm and earn five additional merit badges. The BRONZE PALM represents five merit badges beyond the Eagle rank, the GOLD PALM 10, and the SILVER PALM 15. 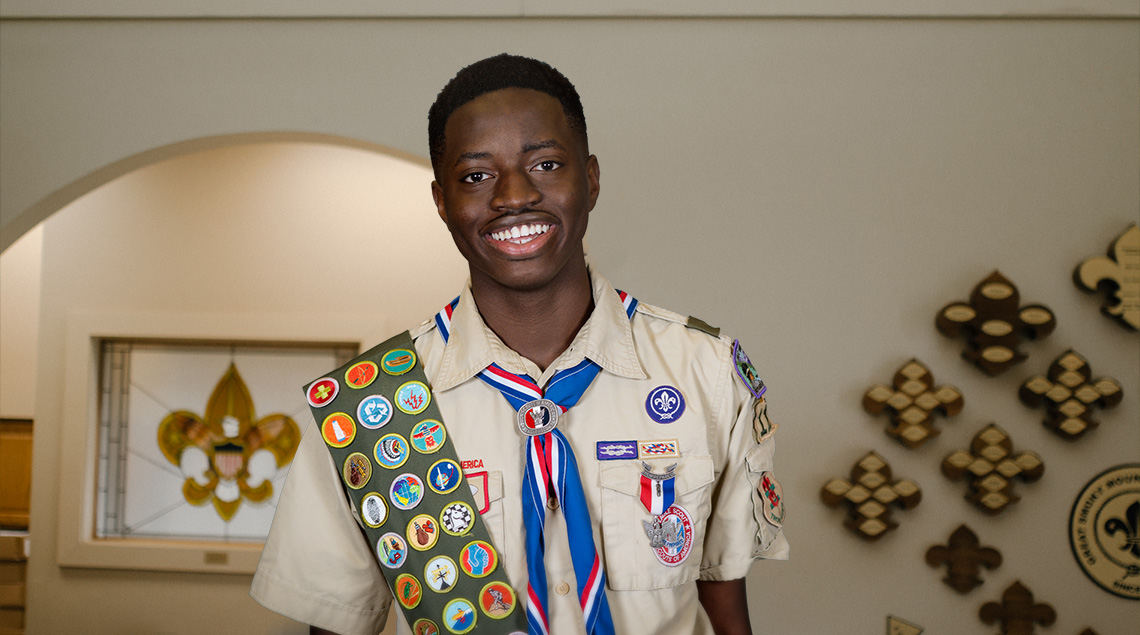 “When I first started scouting I thought it was just boys telling scary stories and roasting marshmallows. My first day of scouting I realized that it was significantly more than the movies portray it to be. Scouting has instilled in me values such as leadership, visceral thinking and commitment that I will forever use not only in my day to day life but also in raising my future kids. Scouting has also given me memories and friendships that are truly once in a lifetime opportunities that I will never forget or trade for anything.” — N. Victor Nwadike, Eagle Scout Troop 119, Sevierville, TN

After completing the requirements for any rank, Scouts must appear before a Board of Review that determines whether the quality of their experience is sufficient for the new rank. For the Eagle rank, these Boards are organized at the district level, rather than the unit level.

Eagle Scout Boards of Review are composed of three to six members, all at least 21 years old, and all with an understanding of the Eagle rank. Sessions typically last a minimum of 30 minutes and are often held in more formal locations than those used for other ranks.

Academic scholarships are based on school and Scouting participation, academic performance, and financial need. Applicants must score a minimum 1800 SAT (if taken before January, 2016), 1290 (if taken after March, 2016), or 28 ACT to apply.

NESA offers an additional academic scholarship called the $50,000 NESA STEM scholarship (up to $12,500 payable for four years) to an applicant who plans to major in a science, technology, engineering, or math field.

Scholarship committees are formed each year in each of the four BSA regions (Northeast, Southern, Central, and Western) to recommend recipients of these scholarships, with the final determination made by the national NESA Scholarship Committee.

NESA merit scholarship applicants must be Eagle Scouts graduating high school or undergraduate college students no farther than completion of the junior year. Recipients may receive the scholarship one time only.

Over 5,000 NESA scholarship applications are received annually, and fewer than 200 are awarded, so the competition is stiff. Plans are being formulated to greatly increase the amount of funds available to award NESA Eagle Scout scholarships throughout future years.

Your Scoutmaster can help guide you through the application process for the Eagle Scout rank. Use the following link for resources will also be helpful.

Please note that alternative requirements are available for Scouts with mental or physical disabilities that prevent them from earning the required merit badges. In order to qualify for alternative merit badge requirements, you must complete the Application for Alternative Eagle Scout Rank.